The Essentials- Crimes and Misdemeanors 1989 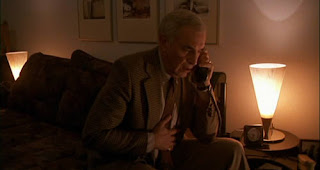 That awkward moment when you find out you were responsible for your mistress' murder.

"The Essentials" is a special column that will feature some of my favorite films of all time and films that I personally feel are classics. The movies featured in “The Essentials” are films that I could not imagine living without. I sincerely hope to open readers up to new, wonderful experiences.

“I’ll say this again, the eyes of God see all. Listen to me Judah, there is absolutely nothing that escapes his sight. He sees the righteous and he sees the wicked. The righteous will be rewarded, but the wicked will be punished…for eternity.”

The quote above is from the father of Judah Rosenthal. One of the central characters of Woody Allen’s “Crimes and Misdemeanors.” This film unravels a story about morality, faith, and making wrong choices for all the wrong reasons. Judah Rosenthal is a success. He possesses great wealth through his medical work. He’s got a wife who adores him, a close family and many friends. What Judah unfortunately also has is a mistress who is edging closer to exposing herself to Judah’s wife.

Judah consults one of his patients named Ben about his personal problems, a man who ironically happens to be a rabbi. He believes Judah should confess his affair to his wife, but Judah feels it will not only ruin his marriage but his image in his community. The audience, however, is compelled to wonder about Judah’s true motives. How much does he really care about his wife versus his image?

Ben, the rabbi, is also the brother-in-law to a documentary filmmaker named Cliff Stern. Stern’s marriage is beginning to go downhill and he’s been out of work for many years. At the start of the film, he is offered work from his wife’s other brother, Lester. Lester is a cocky big time producer who has many Emmys and his success has left him smug. It is clear that Cliff and Lester hate each other, and Cliff only works with Lester for the money. Their feud boils over when they both try to win the heart of the same girl.

The story is a back and forth between the lives of Judah and Cliff. Judah reaches a breaking point leading a double life, and consults his brother who has connections to the mafia. He wants to be free of his mistress. He wonders though, is murder the answer? Cliff is the nice guy, and obviously we want him to get the girl in the end. But how much luck does favor him against a guy who is a rich success?

The cast includes: Martin Landau as Judah Rosenthal, Woody Allen as Cliff Stern, Alan Alda as Lester and Sam Waterston as Ben the rabbi. The film also features Anjelica Houston as Dolores (the girl having the affair with Judah) and Mia Farrow as Hailee Reed (the girl who Cliff and Lester compete for). The whole cast shines in the film and every performance is done just right.

Woody Allen is the key man behind this film. Not only does he play a central character, but he also wrote and directed the film as well. As a lifelong Woody Allen fan, I am pleased to report this is one of his very best movies. The movie is particularly well written and pleasantly stocked with humorous scenes that will make you laugh. Don’t be fooled though! This film falls first and foremost within the drama genre and earnestly commits to its seriousness.

The secret weapon to this movie is the story. It unorthodoxly features a character that views murder in a positive light. Another character goes blind and commits suicide. Divorce and the struggle to obtain love are other interesting side plots that this film depicts. Oddly enough, the only people whom are successful in the film are jerks. Evil and sorrow plague each character we root for in the film. If the eyes of God are on them always, what does that say about God? “Crimes and Misdemeanors" is a blisteringly angry film. A tale which celebrates an existentialist ideal. Yet it is an instant classic which deserves to be seen.

+Philosophy
+Woody Allen
+Movies You May Have Missed
Posted by Shawn Hoelscher at 7:54 PM