OVERLOOKED FILM OF THE WEEK- #1

This is the first edition of "Overlooked Film of the Week" or OFW. This will be an ongoing column highlighting recent films which I feel were unfortunately overlooked. I will start with last years "Celeste and Jesse Forever" starring Rashida Jones, Adam  Samberg and Elijah Wood.

I am a man who believes that the relationship with the right person can lead to great happiness. I realize that sometimes that happiness is hard won. Anybody who does not think that they have to work at relationships is crazy! Of course you have to work at them. Romantic relationships need time, patience, sacrifice, and a great deal of saturation. If you are not the type of person to give in to those demands, then you are better off not getting in a relationship quite yet...

"Celeste and Jesse Forever" tells the story of a romantic relationship between two individuals who may not have been ready to commit to each other. Or perhaps one of them was and the other wasn't. That's another tricky thing about the world of relationships. It doesn't work if one person is giving all they have while the other is "half-assing" it. Both people need to commit in order for the relationship to flourish.

Rashida Jones and Andam Samberg play Celeste and Jesse. At the beginning of the film, we see a quick glimpse or two into their relationship. We see their ups and downs, as any relationship has, and also get introduced to the quirky, cute relationship they have with one another.

It is discovered early on, however, that the relationship isn't all sunshine and rainbows. The couple goes out with their longtime friends and a fight ensues. Seems the friends are fed up with Celeste and Jesse "pretending". Pretending what exactly? You see, Celeste and Jesse are divorced. Shocked? I was! The divorce is fresh, yet Celeste and Jesse remain close as friends. So now you're probably wondering...if they are still best friends and see each other daily, what was the reason for the divorce?

Rashida plays Celeste, a  control-oriented and head-strong girl who knows she is good at being on her own. This type of role Rashida Jones could do in her sleep. She plays Celeste exceptionally well. Adam Samberg is also shines at playing Jesse, a guy who lives life by the day instead of the year. He is easy going and laid back. He tackles the day-to-day struggles just by staying cool. And of course, this gets on Celeste's nerves. We slowly start to see why their marriage didn't work out. And as you could have guessed, one person will try to mend the broken relationship and get back together.

But something big will happen to one of the characters. This will change the outlook of Celeste and Jesse's relationship. You'll know it when you see it. It's a stone cold lesson that drove the film from good to outstanding. If you are into someone and you think that there is the smallest chance that they could be the one, you have to latch on and be patient. Otherwise you will never know what could have been...

As far as the rest of the cast goes, the film is solid. Elijah Wood plays Celeste's boss, a guy we all hope and dream to work under one day. Wood has a comedic side which he lets shine in this film. Emma Roberts plays trashy pop singer which Celeste tries market, a sort of Britney Spears/Kesha type which is also an awesome addition to this film. Everybody does very charming work. There are parts of the film which will make you laugh, but also tender moments of blinding insight.

"Celeste and Jesse Forever" does not have the carbon copy finish that most romantic comedies have these days. Yet there is a ray of light at the center of the story. That is what I like about the story. Sometimes relationships are good, sometimes they are bad. Yet in the end, you have an opportunity to be happy again. You just have to allow yourself to be open to it.

"CELESTE AND JESSE FOREVER" is now available on DVD/blu ray 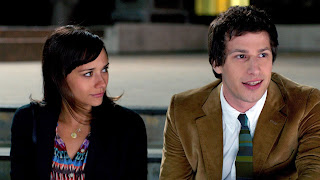 Posted by Shawn Hoelscher at 7:15 PM